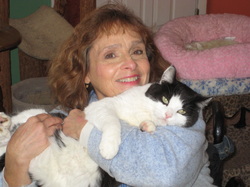 Caring About the Strays, Inc. was founded in response to the overwhelming suffering of so many stray cats in our big cities and in honor of the love and dedication to a cat named MOlly.

Jane DeMartino is the founder of CATS, Inc.  a 501 c3 non-profit organization which is a safe-haven for the most forsaken of companion animals that would otherwise meet a most uncertain death.

In 1995 Jane saw the plight of the stray cat and gradually trapped and neutered a whole colony of cats.  The ferals were returned to a maintained colony and the friendly ones were adopted to loving homes.  She witnessed the healing and curative powers that these amazing animals can bring.

In 2000, Jane moved to the Capital Region of NY and began working with local rescue groups.  She fostered many animals that just needed time to recover sickness, abuse, or injury.  In 2004 she received the American Red Cross HOmetown Hero award for animal rescue and has been featured in Cat Fancy magazine and Catnip Chronicles, an online cat magazine.  She has been the recipient of many humane services awards including a finalist in the Times Union Jefferson Awards for community service.
Thanks to the generous support of donors, Jane's personal mission became Caring About the Strays, Inc. in 2007, a non-profit organization committed to saving the lives of strays that would otherwise die on the streets or be euthanized.   To help her in her mission, she takes in volunteers(youngsters and adults) with emotional issues and/or other disabilities.  She believes the animals give these volunteers unconditional love, and a sense of accomplishment and better self-esteem.

With Jane's guidance and of course, the wisdom of the animals, autistic children have spoken for the first time to a furry friend; despondent veterans have found their voice and purpose to live again; emotionally and developmentally challenged youths have found a way to adapt to a purposeful life and so many more lives have been transformed through the love of the animals.

Jane is extremely grateful to be able to accomplish this mission and thankful to all her friends and helpers.   She is able to do this work from a wheelchair!!  Jane survived a plane crash forty years ago and continues her mission one cat at a time!!